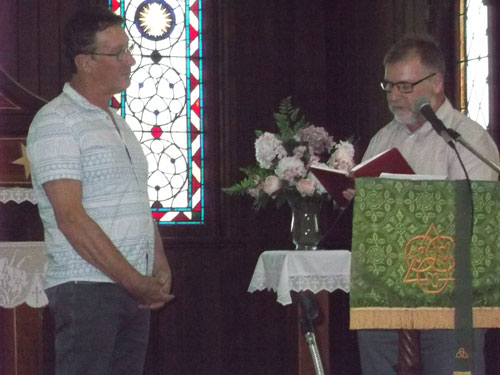 Our theme “ I am the vine you are the branches” of the day was aptly displayed in the painting by Maureen Itzstein of Jesus on the cross and behind him a large grape vine with Bible verses on the leaves. (John 15: v 4-10) Below the painting was a huge vase of colourful poppies from Maureen’s garden to set the tone of the lovely spring weather of the day.

Pastor Peter Geyer  opened with a devotion on John 14: v 1-5 where he spoke on faith, prayer and the Holy Spirit and gave us some thought provoking questions true or false with interesting results.

Pastor Milton Fritsch based his Bible Study on the word “Abide” which is written 11 times in the verses 4-11.

Bishop Paul gave us a comprehensive report on the closure of “Living Grace” church in Toowoomba and spoke about the fruit of the vine and us being the fruit of God. He updated us on the calls within the district at present.

Shirley Klinge then farewelled Pastor Milton Fritsch and his wife Gaylea, as Zone Spiritual advisor and Bishop Paul then prayed for Milton and Gayle as they move to Geelong.

The uplifting praise session was led by Darryl Fryberg who then also sang some gospel songs. 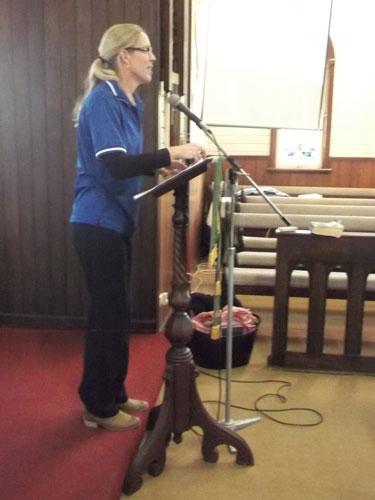 Guest speaker was Susan Hawke speaking on the famine in Africa, and highlighted the enormous amount of sickness and malnutrition and how they cope with the rations provided and assist other children who have no family. All are given wrist bands on arrival for identification. Water is trucked to the camps. Lutheran Schools this year raise funds by walking around ovals etc. There are up to 200,000 in refugee camps. During the singing of  “spread o Spread the Mighty word” the offering of $607.05 was collected and presented to Susan for ALWS. Susan was suitably thanked by Delma Barrett and presented her with a box of vegetables and fruit.

President Shirley advised all where the plans for the LWQ WMZ Retreat at Coolum March 9/10/11 2018 were at and encouraged all to attend if not perhaps support the Zone in another way to make the Retreat a success. 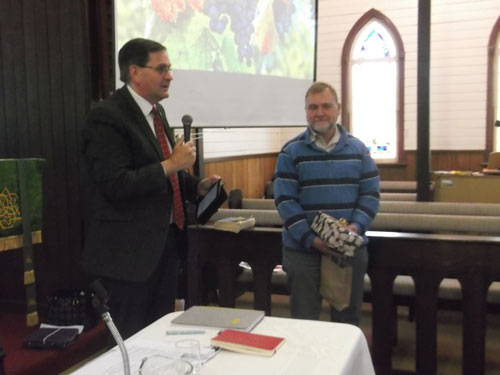