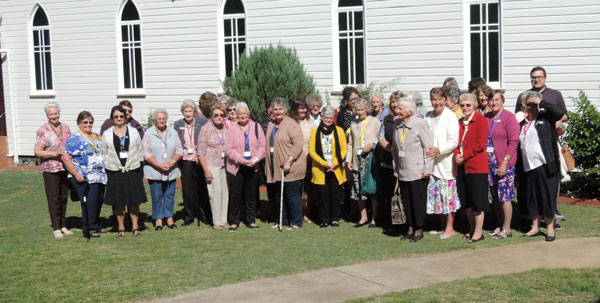 Members of the LWQ Wide Bay-Burnett Zone gathered in Kingaroy for their 50th Annual Rally on 27 April, 2017 under the theme “Cast all your cares on Him” 1Peter 5:7. 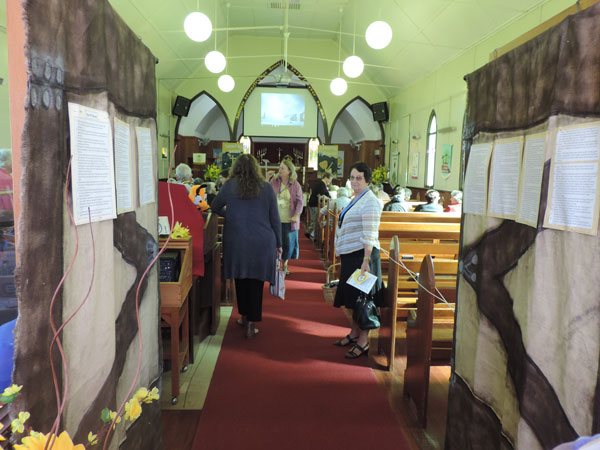 Ladies arriving for the day

Pastor Dylan Miegel led the Opening Worship during which the theme for the day was introduced.  When Jesus, following his resurrection, first appeared to his disciples in the locked room, his greeting was, “Peace be with you.”  He showed mercy and grace to them as he does to us, his disciples of today.  We can cast our cares on him for he cares for us. 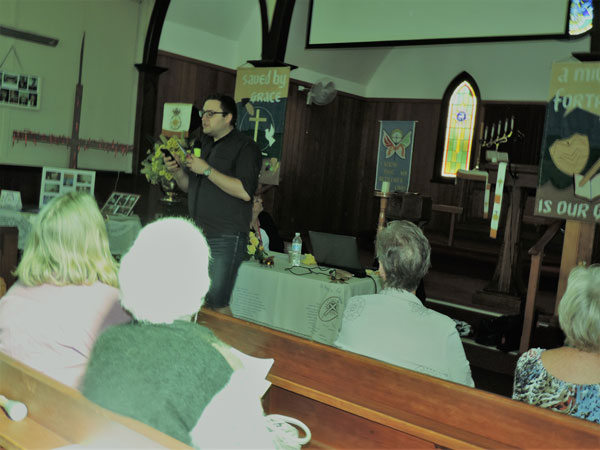 Mayor of the South Burnett Regional Council, Mr Keith Campbell, who had joined us in worship,  welcomed us to the District.  Rather than speaking of the usual Rates, Roads and Rubbish he  chose to mention other “R” words more align with our Rally and Religious beliefs, such as Repentance, Resurrection, Redemption and Righteousness to name a few.

He also said, “I trust that your Rally today will enrich your faith and have some outcomes that will help you do something good toward our fellowman.  People may not remember exactly what you did or what you said, but they will always remember how you made them feel.  If what you do or say is in response to the impact God’s love has on your life, then you are to be blessed.  None of us can deny that God fills our lives with many gifts. I trust your Rally will be very successful”.  (Keith & his wife are members of St John’s Lutheran Church, Kingaroy).

Joan Yappa, on behalf of the Kingaroy Friendship Circle, extended a warm welcome to all. Zone President Pam Prange welcomed Members, Visitors and Pastors to the Rally.  Pam especially welcomed some members of the LWA and LWQ Executives, expressing our joy at their presence.  Total attendance 57 persons. 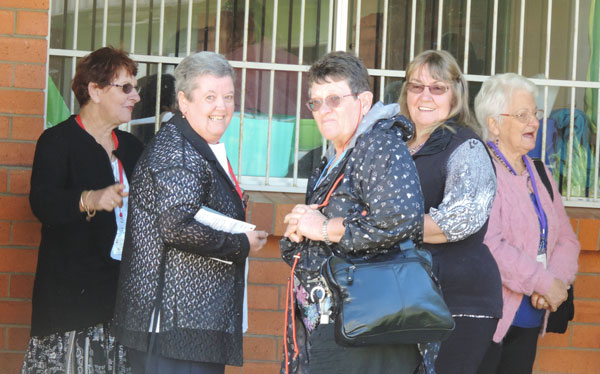 Ladies during the lunchtime

Reports covering the work and activities of our women were presented by Zone President Pam Prange, while LWQ President Karen Bryce’s report, in her absence, was read by Heather Kleidon.  LWA President Tuula Contarino spoke words of encouragement to us, to continue sharing God’s word and his love with others and to leave the growth up to God.  Bishop Paul Smith, in his written report highlighted some of the coming events, District Convention at Grace College,  Discussion of Ordination of Women at Kingaroy,  500th Anniversary of the Reformation in October.

Kingaroy Member, Kay Bochmann gave a moving rendition of “The touch of the Master’s Hand – The old violin”.

Bible Study based on 1Peter (CEV) was led by Pastor Michael Braunberger.   Highlighting various verses, he enabled us to see that God the Father chose us and his Spirit made us holy.  Faith creates joy & joy doesn’t depend on earthly things.  We are foreigners and stranger on this earth.  Because of Jesus death, resurrection and ascension we put our faith and hope in God.  We should have concern and love for each other. God works through suffering for His purposes.  Count it a blessing to suffer for being a Christian as this shows God’s Spirit is with you.  Be humble in the presence of God’s mighty power, and he will honour you when the time comes.  God cares for you so turn all your worries over to him.  Time of suffering is short but raised to life is eternal. 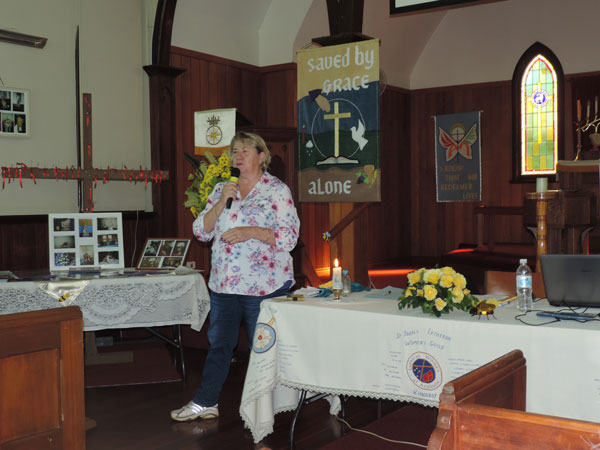 Guest Speaker Sandy Towell shared the story of “Boots & Bulldust” which was established 9 years ago in Nanango, by a few people who were concerned at the high numbers of rural suicide in the area. Realizing others unknown were suffering from various degrees of mental illness often in social isolation they wanted to provide help in some way.  Their original idea never came to fruition but God chose a different way to deliver the assistance they sincerely wish to offer.  Support came from community and business that they never envisaged.

Boots & Bulldust is based on Christian beliefs and values but is not attached to a particular church. They raise their own funds.  They have charity shops in Nanango and Kingaroy.  Having acquired the former Nanango Butter Factory building the group now operates a dropin centre, which they’ve named Creative Connections.  Open each day, those who come find they are not judged but greeted with love. They are invited to work on any of the various crafts, giving them an opportunity to learn new skills – or just watch.  If people have an interest in something not offered, the group seeks to find a volunteer to provide those skills.  Cooking, pottery, art, beading, sewing to name a few.  These activities create an opportunity for conversation and a listening ear.  Every section has to be self- sufficient.

Boots and Bulldust tries to fill the gaps that are not covered by other established groups.  However they do refer people on, if the help they need is already provided by another Group. Boots & Bulldust does assist an immediate need but they never give charity.  They work on a “pay it forward” system explaining to those helped what is asked of them when their situation improves.  Today they have 50 volunteers who give of their time to enrich the lives of others.  At the conclusion of Sandy’s address, Soloist Janice Hogan’s rendition of “They need Him” moved many hearts.

Presentations and vote of thanks were given to Sandy Towell and Janice Hogan by Joan Compton.

The Offering of $807 was divided equally between “Boots & Bull Dust” and Aboriginal Missions,  North Queensland.

Memorial Hymn, “Because we bear your Name” was sung, remembering those who are now with the Lord.  Special Birthdays and Anniversaries were also acknowledged.

Helping to celebrate the 50th Anniversary of Lutheran Women of Queensland, displays of memorabilia which included Banners, photographs, rally programmes etc. were presented in the Church for perusal.

Hymns and Songs, both old and newer favourites were sung and enjoyed throughout the day.

Val Smith moved a comprehensive vote of thanks to all who had contributed to the day being  spiritually uplifting and informative in so many areas.  A special thank you was extended to the members of the Kingaroy Friendship Circle for their hosting of the day and for providing such delicious food throughout the day. 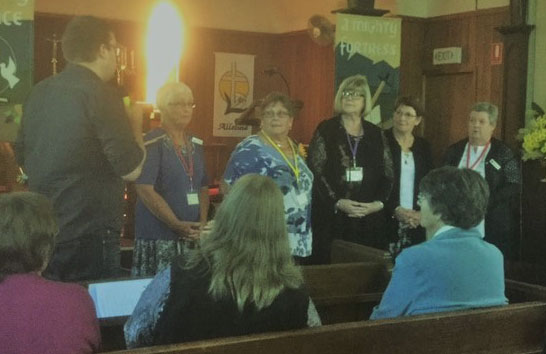 In his Closing Devotion, Pastor Mark Doecke gathered our thoughts once again to the day’s theme by saying, “God whispers in our joy and shouts in our pain.  Can we really have joy in our pain, physical and spiritual?  Christ suffered.  Through suffering we are drawn closer to God.  Suffering shows that God’s Spirit is in you”.

Kayla Freund is a LWQ Bursary recipient and she writes... If you would like to…