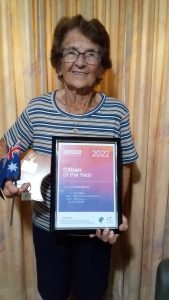 This award is a credit to the many hours that Doreen has given to her Lord, her community, and her many church activities.Doreen was a foundation member of St. Pauls Ladies Guild that was formed in 1952. In 1955 Doreen became the secretary of the guild. 1956, Doreen became treasurer of the Central Zone LWQ, and then when the West Moreton zone was formed. (St. Pauls became Peace Church Gatton). Doreen became President in February 1962 and continued in this role for 4 years then had one year as Vice president after amalgamation 1967 (The LWQ meeting was held in the Star Theatre Gatton) Doreen then became President again up until March 2022 a total of 55 years as president. The reins were then taken up by Mrs. Fay Liftin and Doreen took the role as vice President to assist Fay ease into the position. Doreen over the years has been a big supporter of West Moreton Zone Rally Days, Friendship Days and Retreats. Doreen has never driven in her life and was always seen around Gatton delivering Newsletters, LWA Magazines, church bulletins etc. all on foot. In the early days Doreen was very involved with the Church Bulletin and Church Rosters. Her many days of Hospital visiting was on foot up to the hospital. Much shoe leather has been worn over the years. Doreen has been a big supporter of Meals on Wheels and was active in the community assisting in delivering the meals.

In the community Doreen has been involved in visiting many Nursing homes in Toowoomba, Laidley, and Rosewood and Lowood areas as a member of The Jackeroos singing group and when due to circumstances that folded, she became a member of the Rainbow Group once again visiting the Nursing Homes and entertaining in other areas. When ANUHA Disability Service had the contract for doing the headsets for QANTAS Doreen could be seen busily assisting at the centre with this project as well as assisting in the cooking area making lots of jams and relish. When I asked Doreen what she has noticed most over her 55 years as President? She replied, “Not so many young ones, I used to take my children with me to guild, but now the young ones are all working.”

Doreen, we salute you and say, “Well done good and faithful servant.” May God hold you in the palm of His hands as you continue your journey in life beyond your 93 years.