St Pauls Beaudesert hosted Rally Day with the theme “Hope for a Young Generation”.  Morning tea was enjoyed in the hall, followed by a welcome to all by St Paul’s President, Gloria Neuendorff.  An opening hymn was sung.  Gloria introduced Pastor Greg Vangsness, the zone councillor, who led us in devotion based on 2Cor 3.  Ps Greg displayed a painting, explaining that our life is like a painting that when mistakes are happen, we need to make corrections.

Richard spoke of his involvement as a Chaplain with Scripture Union and the Connect Program which help troubled youth.   Elaine Ludwig from Beaudesert thanked Richard, presenting him with a basket of fruit and a cheque for $500.00, being a proposal passed to donate the offering of $500.00 to Scripture Union.

Daphne Oppermann presented her report, with information of the lively Retreat held at Coolum under the theme of “Dance for the Lord”.  The Treasurer, Leanne Warbrooke, reported a balance at the end of 2013 of $6,162.49.   $300.00 of the interest of this account was proposed to be sent to PNG Medical Supplies.    Leanne also spoke to the proposal that the Zone project for 2014 be “Australian Lutheran World Service”.

A Memorial Hymn “What a Friend we have in Jesus” was sung in memory of our” departed members.   Praise time was led by Shirley Hardke.

After lunch entertainment was enjoyed when the” Celebration Choir” from the Beaudesert State Primary School sang “Hush” (a Hebrew song) and the “Lords Prayer”.  Shirley Hardke shared a power point of photos taken at Retreat Coolum. 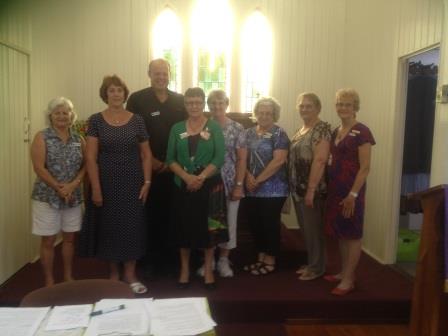 Naomi Marks thanked all who contributed to making the day enjoyable and run smoothly.   Pastor Mark Hampel closed the day with a devotion based on the Parable of the Sower, prayer and hymn.