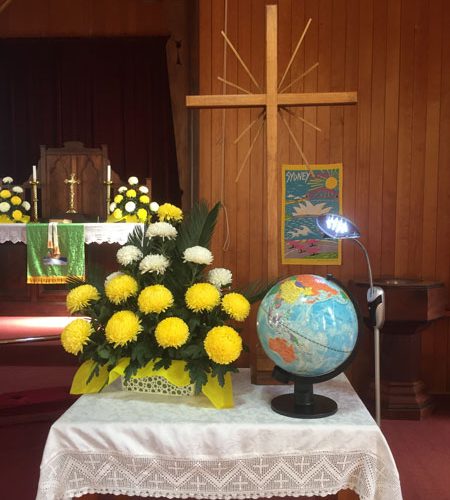 The 51 St.Annual Fellowship Day was attended by 27 people, including 3 Pastors and hosted by Ropeley Immanuel Lutheran Church Guild. What a joy it was for me to revisit this Beautiful church, where 80 years ago I was baptised into the family of God. After a lovely Morning Tea, we gathered under the Theme “God Shines His Light On The World”.

OPENING DEVOTION :- Pastor Noel Burton, in his devotion revealed how, as a young man, he became stuck in a crevice of a dark cave and he was griped with fear as he wondered if he would be rescued or if he might die there in the dark. He likened this to life in this dreadful world. Until we receive “God’s Word, The Light of the World”, and accept the salvation Christ has won for us, we live in darkness.

WELCOMES:- Zone President, Shirley Klinge welcomed all present, especially the Pastors, Noel Burton, ( Laidley), Peter Geyer ( Spiritual adviser) and August Fricke ( Asian Focus) and visitors. Several apologies were received, one from L.W.Q. President, Karen Bryce and Vice President, Shirley Horrigan. Pres. Shirley thanked the Ropeley ladies for being our hosts. Ropeley President, Shirley Reimann extended a warm welcome and explained the visual display of the theme :- The shining cross throwing it’s light on a globe of the world and dozens of coloured tea towels from all over the world decorated the church walls. The flowers:-the white ones depicting the purity of Christ and the yellow ones representing the light flowing from Him.

BIBLE STUDY :- Pastor Peter led us in a study on our Theme. By speaking the words ” Let there be light”, Light was the first thing God created. As light is critical to all life on earth, so the light of Jesus is crucial to the life of all mankind. As Jesus is the Word made Flesh, He became human to die for our sins. God’s Glory now shines in the hearts of those who believe and are baptised. Today many reject Christ as their Saviour because they don’t want to hear they are sinners. The Holy Spirit must call them by the gospel And we, as Christians, must lead and encourage unbelievers to accept Jesus as their only Saviour.

In John 8: 12 Jesus said “I am the Light of the world “and in Matthew 5:14-16 Jesus is saying to us “You Are the light for the whole world -—-You must shine before people, so they will see your good works and Praise your Father in Heaven.

OUEENSLAND NEWS:- Acting Bishop, Pastor Mark Veinikka sent a report on the happenings in the churches in our state. This was read by Pastor Peter. Shirley Klinge read a letter from Karen Bryce, who was unable to attend because she has had surgery on her eyes. Shirley also spoke about Convention at Hervey Bay.

HYMNS OF PRAISE:- relating to our theme, were sung throughout the day and were arranged by the Ropeley ladies. Elaine Steffens (Lockrose Pres.) was our capable organist.

GUEST SPEAKER:- Pastor August Fricke was our speaker. We all felt we already knew him from reading “Fire” an Asian Focus publication and the ” Lutheran”, but what an inspiration and humbling honour to hear him in person. He fearlessly steps out in “faith as his shield” and ” God’s Word as his sword” and spreads “light” to the poor, lost and desperate in many areas of the world ( some where he’s not supposed to be ) Pastor finished his talk by telling of one project that desperately needed $500.00 to complete. President Shirley introduced the Offering proposal, which was unopposed, to go to Asian Focus. From our small group $513.00 was received. Our thanks and praise went to God! Delma Barrett thanked Pastor for his time and showing us the work of Asian Focus and presented him with a box of fruit and vegetables. NEXT ZONE RALLY to be held at Laidley on Wendesday 29th May 2019.

CLOSING DEVOTION was led by Pastor Peter Geyer. When a blindfold is placed over our eyes, it is very hard to find our way around. What a relief to have it removed. In the same way, we are spiritually blind until we learn about salvation through Jesus Christ’s suffering in our place and the washing away of our sins. A new light and life shines in us when we accept His saving grace. Now it is our challenge to spread this precious message of salvation to others. We must let our lights shine to lead them to God. Pastor closed the day with prayer.

MANY THANKS:- Dawn Heck graciously moved a vote of thanks to all who had helped in any way to make this a blessed day of Love and Fellowship.

We finished our year 2021, by celebrating the Birth of our Saviour with a Morning…

Crows Nest and Haden Fellowship hosted a Fellowship Day on September 14, 2022 with Haden…